"Racism morphs into different forms and modes of expression. Such as the extremely troubling increase in xenophobia, homophobia, discrimination and hatred in many parts of the world targeting people on the basis of their identity, including race, ethnicity, nationality, religion, sexual orientation, disability and immigration status. Across the world, Jews, Muslims, Christians and other faith communities were attacked and their places of worship destroyed for the sheer account of their religion." 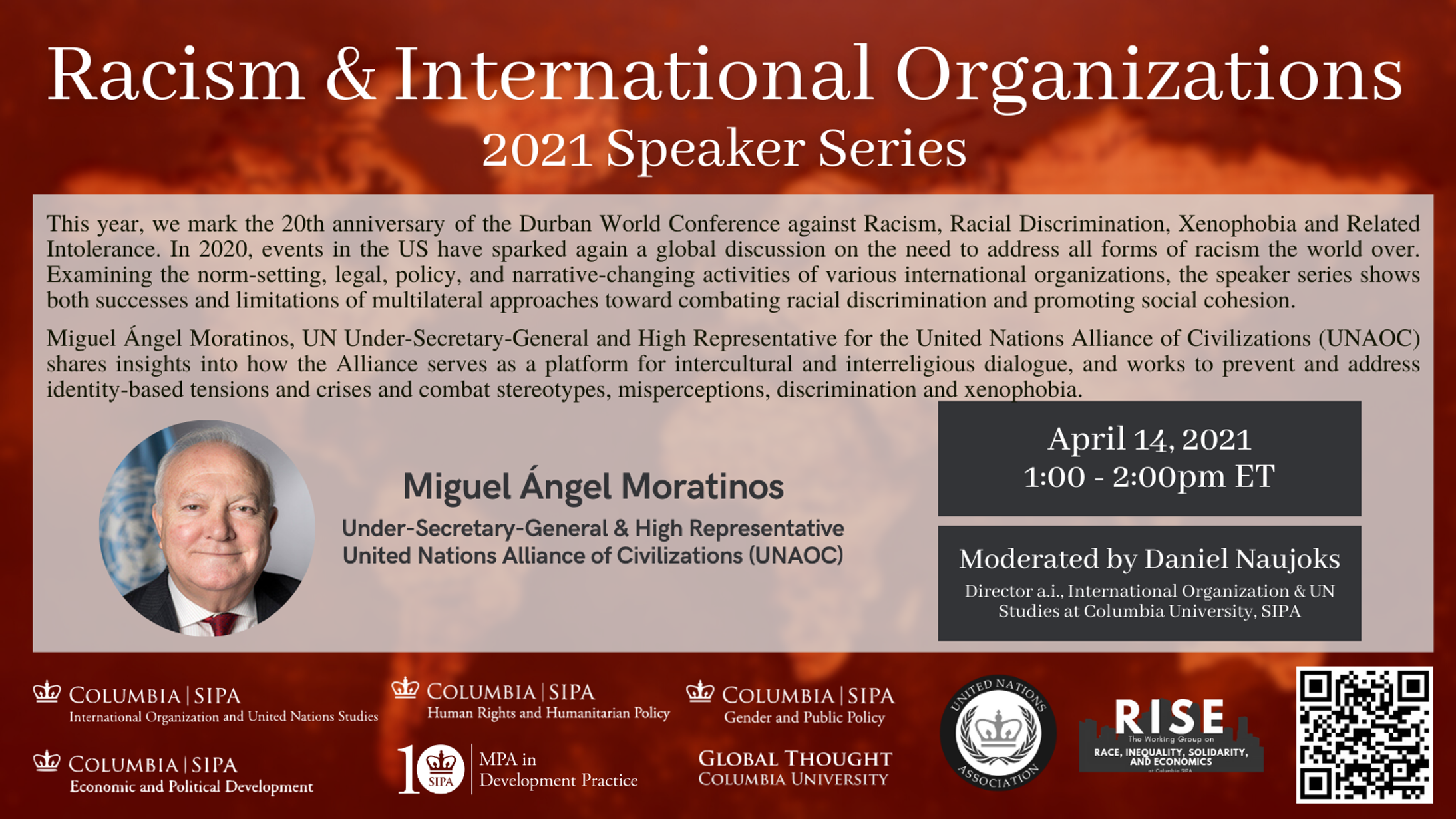 I am very pleased to join the other distinguished speakers in this series dedicated to addressing this highly important topic.

Few weeks ago, on 21 March the world commemorated the International Day for the Elimination of Racial Discrimination. It was a reminder of the painful incidents that took place on the same day in 1960 in Sharpeville, South Africa when police opened fire on peaceful protestors against apartheid laws. Around 69 people were slain in what is known as the Sharpeville Massacre. In remembrance, the United Nations General Assembly proclaimed 21 March as an International Day for the Elimination of Racial Discrimination in 1966 and insisted upon the global community to intensify its efforts to eliminate racial discrimination wherever and in whatever form it exists.

So where are we today in the fight against racism?

Sadly, racism is still thriving everywhere despite the demise of apartheid.

We still see racism in the pervasive discrimination suffered by people of African descent. We see it in the injustices and oppression endured by indigenous peoples and other ethnic minorities. We see it in the abhorrent views of white supremacists and other extremist groups. These manifestations of racial discrimination are deeply rooted in colonialist history and centuries of slavery. It’s, therefore, important to recognize that historical injustices have contributed to poverty, underdevelopment, marginalization, social exclusion, and instability for both people and countries alike.

It is time to acknowledge and repair longstanding wrongs and reverse their consequences. Reparatory justice is essential for reconciliation, prevention of conflict and the creation of societies based on fairness, equality, respect and solidarity. It can help mend the social contract between people and the State.

Racism morphs into different forms and modes of expression. Such as the extremely troubling increase in xenophobia, homophobia, discrimination and hatred in many parts of the world targeting people on the basis of their identity, including race, ethnicity, nationality, religion, sexual orientation, disability and immigration status. Across the world, Jews, Muslims, Christians and other faith communities were attacked and their places of worship destroyed for the sheer account of their religion.

The COVID 19 pandemic has exacerbated pre-existing fissures and fragilities in our communities including among many others, systematic prejudice, discrimination and inequalities. Such inequalities were manifested in many ways such as the high mortality in marginalized groups, food and housing insecurity, job loss, and inequitable learning and education opportunities due to closures of schools in most part of the world and dependence on digital access. And now, the glaring vaccine inequity where political games come into play.

During the pandemic, the disturbing rise of ethnonationalism, neo-Natizm and far-right extremism was manifested in the verbal and physical attacks against people of Asian descent who were unjustly vilified for the pandemic. This was so despicable that such prejudices and racial profiling was built, in many cases, into the codes for facial recognition and artificial intelligence.

But perhaps the repercussions that unfolded here in this country following the death of George Floyd had unleashed a global awakening to the existence of racism. People around the globe took to the streets to protest racial injustices. They recognized that racism is another pandemic that is as menacing as the pandemic.

With this awakening, people were more vocal in their demand for urgent action to eliminate structural and systemic racism and injustice in all spheres of life as well as a renewed commitment to implement the Durban Declaration and its Programme of Action.

Twenty years after the World Conference against Racism, Racial Discrimination, Xenophobia and Related Intolerance, the promotion of equality and non-discrimination remains a priority for the international community. In 2015, when world leaders converged at the UN headquarters in New York, they envisaged a world of mutual respect for race, ethnicity and religion or faith. One where cultural diversity is perceived as an asset not a threat; A world grounded in human rights and international law. And again in September 2020, on the occasion of the United Nations 75th Anniversary, they committed to “address the root causes of inequalities, including violence, human rights abuses, corruption, marginalization, discrimination in all its forms, poverty and exclusion, as well as lack of education and employment”. As such, the 2030 Agenda for Sustainable Development provides a blueprint to promote inclusion, justice and dignity for all and combat racism in all its manifestations (SDG 16 and SDG 10).

The United Nations was founded on the principles of the dignity and worth of the human person, without distinctions of race, color, ethnic or national origin, religion, belief or gender. All human beings are born free and equal in dignity and rights.

As societies become ever more multi-ethnic, multi-religious and multicultural, it is imperative that we invest more in social cohesion and social inclusion.

Our recovery efforts from the global pandemic and our success in re-building a better world rest on recognizing our shortcomings and acknowledging our pitfalls. Racism and discrimination stand out. They pose a challenge to every government and every society.

At the United Nations, the Secretary-General has long recognized the grave challenges and repercussions posed by racism if left unaddressed. That is why, last year, Mr. Guterres launched a system-wide discussion led by the United Nations Task Force on Addressing Racism and Promoting Dignity for All. Part of its efforts are to engage staff on issues related to racism, conscious and unconscious bias, and how to create an anti-racist organization in the United Nations.

The UN also supports Member States in developing legal tools and building capacity to address racism in all its forms. This creates a special responsibility for us – all of us who have the privilege of working for the United Nations – to examine and address racism and racial discrimination inside our Organization.

As a UN entity, the United Nations Alliance of Civilizations has long recognized the relevance of ending racism and all forms of discrimination to building just, peaceful and inclusive societies. Our motto reads Many Cultures…One Humanity. Fifteen years later, this mantra continues to guide our programming activities and political advocacy initiatives.

As you are aware, following the 9/11 attacks on the United States and the series of terrorist attacks on Madrid, Bali and London, the Alliance was launched in 2005 as the special initiative of the United Nations Secretary-General Mr. Kofi Anan at a time when many member states recognized an urgent need to fill a policy gap in the governance of cultural and religious diversity, which was threatened by growing divisions between communities and polarization of attitudes triggering the rise of violent extremism, terrorist attacks and the frequent manifestations of xenophobia, related intolerance and racism based on religion, belief, ethnicity or race.

UNAOC was created to serve as a coalition of state and non-state actors against extremist forces and radical ideologies; a movement of collective will to advance mutual respect for cultures, traditions, and religious beliefs, and a platform to bridge divides and overcome prejudice, stigmatization, misperceptions, and polarization.

Addressing the global call for concrete action for the total elimination of racism and racial discrimination and xenophobia, the UN General Assembly resolution 74/137 in January 2020 underlined the need to promote tolerance, inclusion and respect for diversity and the need to seek common ground among and within civilizations in order to address common challenges to humanity that threaten shared values, universal human rights and the fight against racism, racial discrimination, xenophobia and related intolerance, through cooperation, partnership and inclusion.

The Alliance promotes intercultural and interreligious dialogue, tolerance and mutual respect as a means of addressing the challenges that emerge from the hostile perceptions that often incite violence and discrimination and feeds prejudices.

The dialogue of civilizations, cultures, and religions is necessary, possible, and fruitful. Intercultural and interreligious dialogue is a critical tool against isolation, mistrust, and confrontation. It is also the most powerful vector for conflict prevention and conflict resolution. I must say, a viable tool that has been often overlooked.

History has shown that dialogue is not a simple process, but that if we fail to cultivate it, the situation can give way to a monologue or to mutism, which is conducive to conflict and violent extremism and polarization. A constructive dialogue is the path towards understanding and respecting the other.

I believe that governments cannot do it alone. In fact, no one can change hearts and minds by working in silos. Defeating the mongers of hate and racist ideologies demands an All-of-Society approach. Civil Society, women and grassroots organizations, community-based organizations, religious leaders and faith-based organi¬zations play a vital role. We have long recognized that active engagement and partnership with these stakeholders is key to fulfilling the mission of UNAOC. So we strengthened and expanded our network of youth-led organizations, faith actors across the faith spectrum, women leaders and civil society organizations.

Advancing cultural diversity, religious pluralism, mutual respect and human fraternity are values and principles that we mainstreamed in our cross-cutting project activities.

Believing in the potential of young women and men as agents of positive change, we supported their community work aiming at promoting cultural and religious diversity and countering and preventing violent extremism and hate speech through mentoring and seed-funding. Education is key towards that end. So we tailored capacity-building workshops for youth to strengthen their peace-building skills.

Convinced that defeating the scourge of racism and all forms of discrimination plaguing our societies and fragmenting it requires comprehensive strategies that address all forms of discrimination and related intolerance based on religion and belief. My office developed in 2019 a UN Plan of Action to Safeguard Religious Sites. A communication campaign engaging youth was launched in 2020 to promote the universality and spirituality of places of worship as symbols of our humanity and shared values.

In this context, I have expanded and strengthened our network of religious leaders and faith actors inspired by the Document of Human Fraternity co-authored and signed by His Holiness Pope Francis and His Eminence the Grand Imam of Al-Azhar.

Along the same lines, I plan to work closely with other UN entities to explore joint action on discrimination and violence emanating from Islamophobia and anti-Muslim hatred and all forms of related intolerance based on religion or belief.

Earlier this year in February, I was privileged to take part in the ECOSOC Special Ministerial Meeting themed “Reimagining Equality: Eliminating racism, xenophobia & discrimination for all in the decade of action for the SDGs”.

Relevant to our topic today, I am pleased to share with you few excerpts of the Presidential Statement that resulted from that meeting summarizing the key messages and recommendations that emerged from the discussions and many of which I have already highlighted earlier:

I will stop here as I would like to give some space for your comments and questions.