It came as no surprise that since the pandemic, we have witnessed how faith-based organizations and their leaders have embodied the principle of leaving no one behind and the fight for social justice, contributing to mobilize resources and support the hardest to reach. Faith actors have a track record of being on the front-lines when crises hit home.

Remarks by
The High Representative for the United Nations Alliance of Civilizations
at the Opening Plenary of 2020 G20 Interfaith Forum
Riyadh, 13-17 October 2020 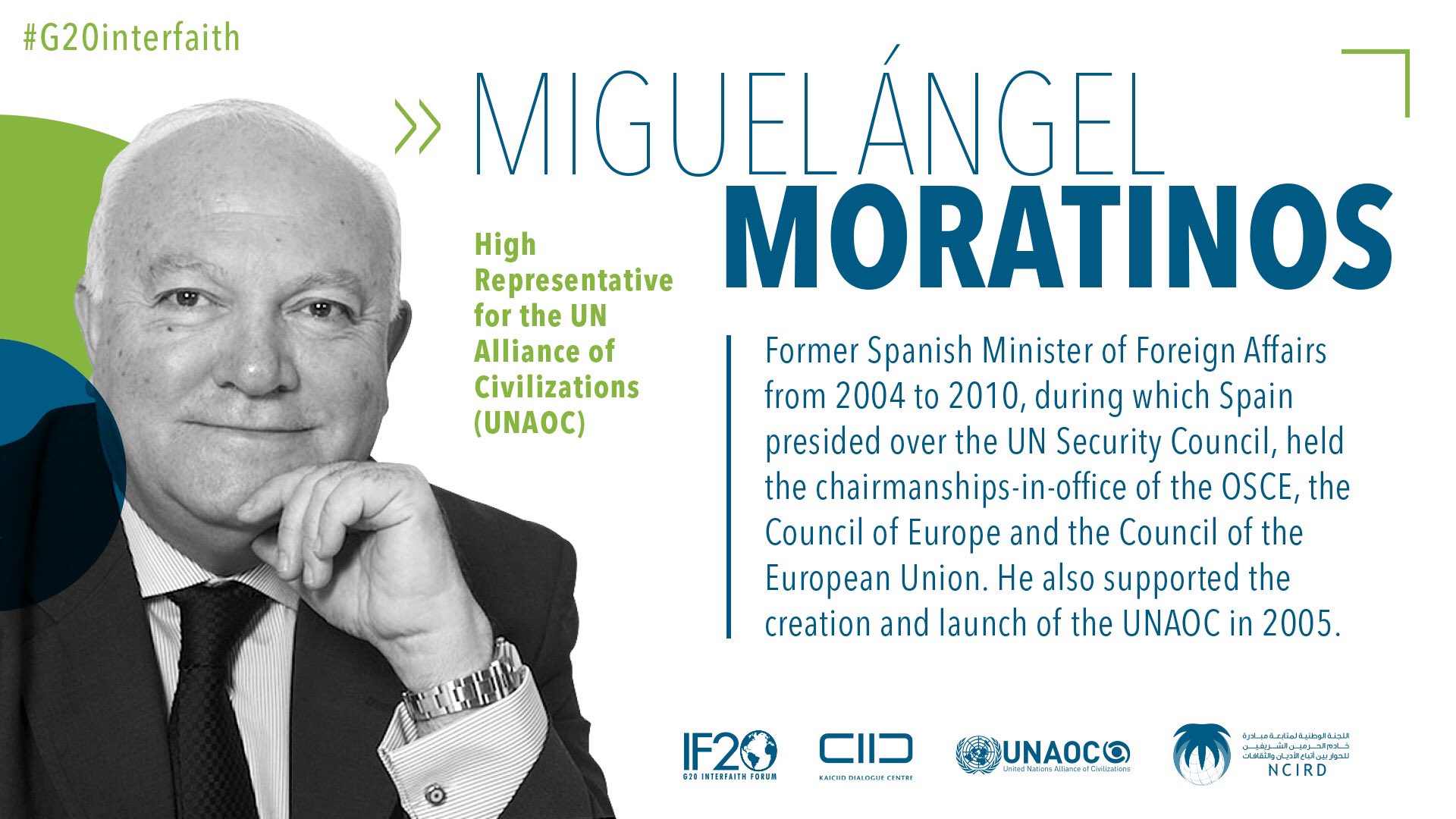 Your Excellency, Abdullatif Al-Sheikh, Minister of Religious Affairs in the Kingdom of Saudi Arabia,

It’s a great pleasure to be here with all of you in this important and timely High-level event. UNAOC is proud of its partnership with KAICIID, The National Committee for Interfaith and Intercultural Dialogue of the Kingdom of Saudi Arabia and the G20 Interfaith Forum Association in co-organizing this forum.

I am very glad to see many of our partners who have joined this forum across the time zones.

I thank His Majesty King Salman bin Abdelaziz, the Custodian of the 2 Holy Mosques and the Kingdom of Saudi Arabia for hosting this forum which was planned since last year to take place in Riyadh.

We owe it to modern technology that we are still able to open this forum today despite the challenges posed by COVID19 and which, I believe, have impacted each and everyone of us.

On the flip side, technological advancement has its downside. It has manifested the digital gap of those who have and those who have not. It has also broadened and emboldened the outreach of hate mongers to spread their toxic messages to a wider audience who, by virtue of the new normal virtual world, are spending more time on-line. We have witnessed a surge in racism, xenophobia, Islamophobia, Christianophobia and Anti-Semitism as well as all forms of discrimination based on religion, belief, colour, race or gender. The world has turned inward instead of outward. Localization as opposed to globalization was manifested as cities and citizens were the first responders to the pandemic.

This Global human crisis has magnified the deep-rooted social and economic injustices and inequalities that have plagued our societies for a long time. Those inequalities have not been properly addressed. This is the time to reverse course reset our actions on the right track. This is then time for a different approach driven by unity and solidarity. But most of all by compassion and humility.
It is here where I see a convergence between faith actors and state actors. I hope this forum that brings together state and non-state actors will send a clear message to the G20 world leaders.

Distinguished guests
The vast majority of people on earth are members of a spiritual community. And although each has their own traditions and convictions, there is a common notion that they share together – the commandment to show compassion, fraternity, humility and respect for others regardless of their religion, race, culture or gender.

I find myself particularly inspired by the Document of Human Fraternity co-signed by His Holiness Pope Francis and His Eminence the Grand Imam of Al Azhar Sheikh Ahmed Al Tayeb. I was humbled to have had audience with both of them last year. Many of the themes in this historical document, many of which are relevant to the themes discussed in this forum, were further developed in the remarkable Encyclical Fratelli Tutti released by HH Pope Francis last week.

The preamble of the founding Charter of the United Nations “We the Peoples” speak volumes of this universal human right. But long before the UN was born, faiths across the faith spectrum embraced the notion of equal rights for all human beings.

In that sense, it came as no surprise that since the pandemic, we have witnessed how faith-based organizations and their leaders have embodied the principle of leaving no one behind and the fight for social justice, contributing to mobilize resources and support the hardest to reach. Faith actors have a track record of being on the frontlines when crises hit home.

Therefore, It was encouraging to see how they supported the Secretary-General’s appeal for solidarity, unity and compassion and came forward supporting his call for a global ceasefire.

In life-altering crises when people are desperate and uprooted from their lives, faith has often been their anchor and the place they turn to for consolation and hope.

Many religious leaders have a mobilizing capacity as well as the trust of the communities they serve. But with trust comes responsibility too. In these troubling times, religious leaders have the responsibility of promoting messages about gender equality, challenging stigma and hate speech , dispelling misinformation and rumors, championing attention to and inclusion of, vulnerable populations including minorities, migrants, refugees, internally displaced persons, indigenous peoples, prisons, people with disabilities, and members of other marginalized groups, by creating supportive environments; advocating for their rights and access to diagnosis, treatment. and vaccines; sharing evidence-based accurate information; and publicly standing against statements and acts that encourage violence and human rights violations against people.

In this context, the UN Inter Agency Task Force for Religion and Sustainable Development endorsed by a community of 40 Multi-faith Advisory Council issued a joint statement encouraging those faith based organizations to remain strongly engaged with their respective constituencies to assist them in preparing for and responding to the current crisis. We are also working with the Office of High Commissioner for Human Rights and the Office of the Special Advisor for Genocide Prevention and with 40 faith-based organizations to operationalize a Global Pledge for Action through a number of results-oriented actions.

Furthermore, we launched on 29 September the communication campaign for the UN Plan of Action to Safeguard Religious Sites which my office developed and was launched by the UN Secretary General in September 2019. I invite you to join in promoting the plan by using the hashtag #forsafeworship and checking the new dedicated website https://safeguardreligioussites.unaoc.org/

The United Nations Alliance of Civilizations has long recognized the value-added of religious leaders and faith-based organizations. Hence, we expanded a unique global platform for interfaith dialogue. Intercultural and interreligious dialogue is a critical tool against isolation, mistrust, and confrontation. It is also the most powerful vector for conflict prevention and conflict resolution. I must say, a viable tool that has been often overlooked. History has shown that dialogue is not a simple process, but that if we fail to teach and cultivate it, the situation can give way to a monologue or to mutism, which is conducive to conflict and violent extremism. HH Pope Francis describes it as parallel monologues.

I would like to conclude by drawing on language from Pope Francis’ Encyclical in which he said “ We must put human dignity back at the center and on that pillar build the alternative structures we need.”

Indeed as we chart a new course towards rebuilding a better world, we should do so with the human being at the center of our efforts.

I look forward to five days of fruitful discussions and hope the outcomes and recommendations will find their way to the G20 summit.