Conflict prevention and conflict resolution go hand in hand with mediation. But when the world is more global, more complex and more uncertain, we need to think of innovative ways to address these challenges and adapt to the new realities of the 21st century. 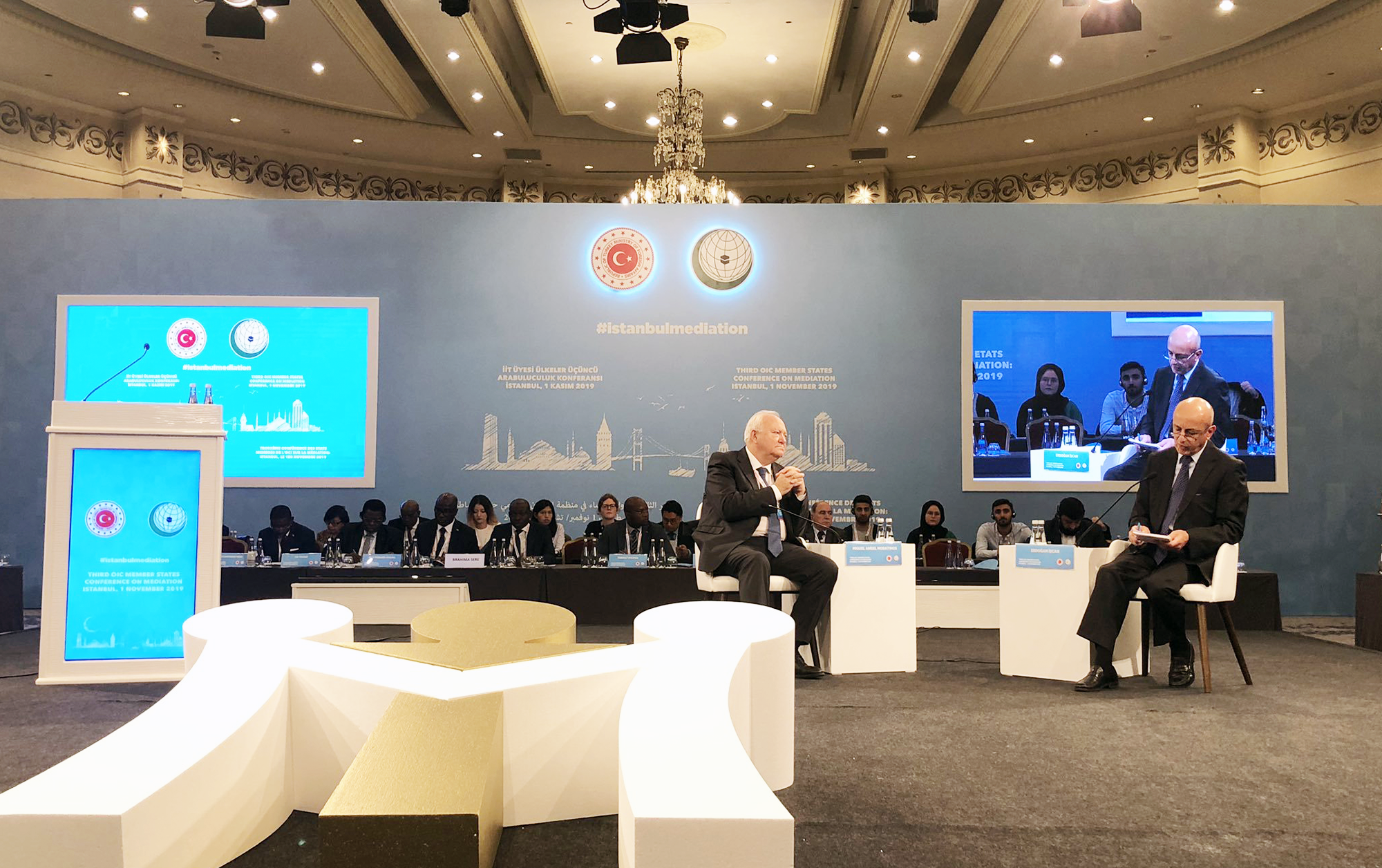 At the outset, I thank H.E. Minister Mevlut Cavusoglu for this opportunity to address this important meeting and speak about one of my favorite topics: Mediation and zooming in on effective mediation. I recall the UN Secretary General’s vision on a “surge in diplomacy” for sustaining peace. Mediation is one of the most essential tools for conflict prevention and sustaining peace.

One that is streamlined across all phases of the conflicts cycle, namely pre-conflict to prevent it, during conflict to resolve it peacefully and post-conflict to sustain the peaceful settlement. In other words, mediation becomes effective when it is used across the full spectrum of the peace continuum.

Mediation is one of the main instruments of diplomacy. It could be the first step prior to the negotiations. Historically, many references could be made to the successful processes of mediation. As a mediator and negotiator myself, I drew inspiration from the remarkable Francois de Callieres, the renown French author and diplomat whose theory on mediation shaped my diplomatic career particularly his book De la manière de négocier avec les souverains (1716) or The Practice of Diplomacy) which was considered a model introduction to the subject of diplomacy . He said, “Every Christian prince must be guided by the principle of not taking arms to support or defend his rights and use force only after having tried reason and persuasion.”

Yesterday, in the opening session of the 6th Istanbul Conference on Mediation, the United Nations Secretary-General and the Foreign Minister of Turkey were clear about the changing nature of today’s conflicts and the need to adapt our tools to the changing reality. As such, I would like to propose what I consider to be a complementary dimension to mediation, namely the socio, cultural-religious mediation.

But what kind of conflicts our world face today? Conflicts are multiplying and are becoming more complex. People whose identities are defined by religion, culture or ethnicity, continue to be besieged by hatred. Significant political discourse happens online with implications on how conflicts start, evolve and end.

We see it in the ignorant vitriol directed at minorities including refugees and migrants who are being used by far-right parties and poisoning the political discourse. We see a return of hatred displayed in rising anti-Semitism, Islamophobia and attacks on Christians. Xenophobia and violent misogyny are amplified through digital platforms. Polarization of the past may have been largely based on issues of conflicting national goals, colonialism or opposite pollical views. Today, however, the angry tone in the political discourse is often attributed to differences in identity whether defined by religion, ethnicity or culture. The broader spectrum of tensions we address today also reflects the changing nature of the threats to peace that we face. Internal conflicts often take regional and transnational dimensions. Therefore it cannot be business as usual when we address these conflicts. A new holistic approach that is a) inclusive and b) based on complementarity is critical to successful mediation.

Allow me to back for a few minutes to the three cycles of conflict that I mentioned earlier in my remarks. I would like to demonstrate the added value and rationale of incorporating this socio, cultural and religious dimension in mediation processes.

In the pre-conflict phase, or preventive meditation religious leaders and faith actors have the capacity to set the stage for the start of the mediation process through confidence-building measures.

During the conflict or the second cycle is where mediators should have empathy and understanding when the conflict is not entirely of a political nature and has a religious or cultural aspect. I give an example of the Camp David talks in which I was personally involved in my capacity as the EU Peace envoy.

There is no doubt that the role that religious institutions play here is significant. Religious institutions are often the only functioning institution in a fragile or pre-conflict situation. They are present before, during and after conflict. They provide early warning for signs of conflict in communities. Working with and through religious and other institutions to provide ‘pre-emptive’ reconciliation frameworks can stop conflict becoming violent or returning to violence – it can set it on a different path. Their work is done by young and old, by women and men, by rich and poor. It seeks a peoples’ peace.

The third cycle is post-conflict and here UNAOC can play a valuable role in consolidating mediation efforts again by tapping into the mobilizing capacity of faith actors to bring reconciliation which complements mediation and the whole conflict cycle.

In line with this recommendation, I have identified Mediation as one of my priorities in the Action Plan for UNAOC 2019-2023. I presented the plan last month at the UNAOC Group of Friends Ministerial meeting. I explained that facilitated intercultural and interreligious dialogue will serve as an essential tool for conflict prevention and conflict resolution. To operationalize this approach, a Rapid Task Force composed of a pool of cultural and religious advisors will be called upon to facilitate dialogue in identity-based conflict settings. In doing so we will ensure that our work complements the efforts of and is coordinated with the Department of Political and Peacebuilding Affairs and Department of Crisis Prevention and Recovery, as well as the Secretary-General’s High-level Advisory Group on Mediation and Peace-building Commission to further enhance mediation efforts. This process will be done in consultation with local, regional and international stakeholders. To that end, interacting with the Co-chairs of the United Nations Group of Friends of Mediation (Turkey & Finland) and following up the results of the Istanbul Conference on Mediation, the OIC Member States Conference on Mediation and of the Alicante and Las Palmas International Conferences on Preventive Diplomacy in the Mediterranean and in Africa would be essential.

Equally important to complementarity is inclusivity. We should expand the space for mediation to include a wide range of actors such as civil society, women-led organizations, religious leaders and youth leaders. That means working at the local and community levels to build peace from the ground up. In this context, promoting the culture of mediation at the societal level and making it an everyday practice. This is where the inclusion of women and youth in mediation processes helps.

Most of us had followed the discussions yesterday at the 6th Istanbul Conference on Mediation where we listened to the different actors. It was heartening to see the growing support for mediation as an essential tool for preventing and resolving conflicts. It is only befitting that Turkey is the host of yesterday’s and today’s meetings. Together with Finland, they both led the way at the United Nations through the Mediation for Peace Initiative in 2010 which culminated in the creation of the Group of Friends of Mediation co-chaired by the 2 countries. Since then Turkey continued to support and host mediation conferences since 2012. I seize the opportunity to commend the Government of Turkey for establishing an innovation cell to strengthen capacities for innovation, including the use of digital technologies across the peace and security mandates.

The Group of Friends of Mediation initiated a resolution on the role of regional and sub-regional organizations in Mediation. In July 2014 the UN General Assembly unanimously adopted the resolution A/68/303. In this context, OIC has established a Group of Friends of Mediation to contribute to the efforts in capacity building for mediation at the OIC. In their meeting in Jeddah in June 2019, they discussed a document that examines mediation in culturally sensitive settings. The OIC’s Statistical, Economic and Social Research and Training Center for Islamic Countries are studying to develop a code of conduct on that matter.

In my visit to the Kingdom of Saudi Arabia last July I visited OIC headquarters and we discussed a wide array of issues and I am certain that UNAOC’s efforts would also contribute to the OIC’s recent endeavors.

Concluding , I re-iterate that conflict prevention and conflict resolution go hand in hand with mediation. But when the world is more global , more complex and more uncertain , we need to think of innovative ways to address these challenges and adapt to the new realities of the 21st century. Yesterday’s and today’s discussions were reassuring that there is a new momentum around mediation that we can build on and carry it further.

In this spirit , I thank you all and I look forward to the interactive discussions.