The International Day of Human Fraternity 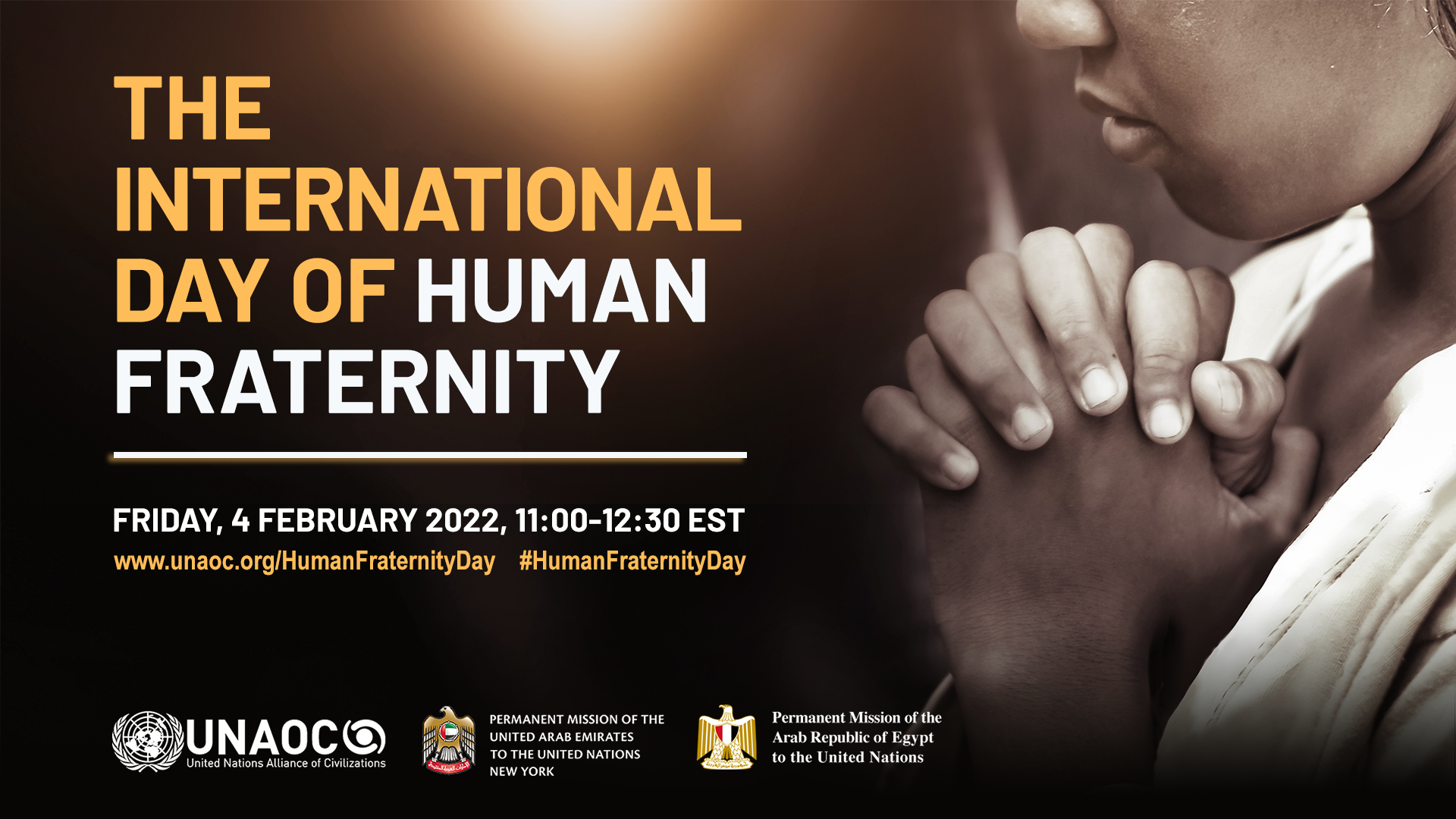 WHAT:
On the occasion of the International Day of Human Fraternity, the United Nations Alliance of Civilizations (UNAOC) in partnership with the Permanent Missions of Egypt and the United Arab Emirates to the United Nations are organizing a virtual panel discussion with member states, religious leaders, faith actors and civil society representatives.

WHY:
The United Nations General Assembly adopted resolution A/RES/75/200 on 21 December 2020 proclaiming February 4 as the International Day of Human Fraternity to be observed every year as of 2021. The resolution co-facilitated by Egypt and the United Arab Emirates takes note of efforts and initiatives aimed at promoting interreligious and intercultural dialogue including the meeting between His Holiness Pope Francis and His Eminence the Grand Imam of Al-Azhar, Ahmad al-Tayeb on 4 February 2019 in Abu Dhabi, UAE that resulted in the signing of the “Document on Human Fraternity for World Peace & living Together”. It also invites all Member States to further promote a culture of peace, tolerance, inclusion, understanding and solidarity.

Celebrating human fraternity and the values it embodies such as mutual respect, diversity of cultures and religions, advancing intercultural and interreligious dialogue reminds us of the common values that we share as one humanity. This spirit is particularly needed at a time when many communities are divided across religious, ethnic and cultural lines. Growing religious hatred, stigma and manifestations of various forms of discrimination against vulnerable communities including minorities are an affront to human rights and UN values. Such vile acts risk undermining global efforts to recover and rebuild better in a post-pandemic era.

In addition to special remarks by: SG of Higher Committee of Human Fraternity, Rabbi Arthur Schneier, SG of Religions for Peace, Mr. Adama Dieng as well as interventions by the Permanent Observer of the Holy See, Permanent Representatives of Morocco, India, Bahrain, Saudi Arabia.

LIVESTREAM:
The event will be streamed live on the UNAOC website: https://www.unaoc.org/humanfraternityday/

SOCIAL MEDIA:
Join the social media conversation by following @UNAOC and posting with the hashtag #HumanFraternityDay