The International Day of Human Fraternity: A Pathway to the Future

In Commemoration of the World Interfaith Harmony Week 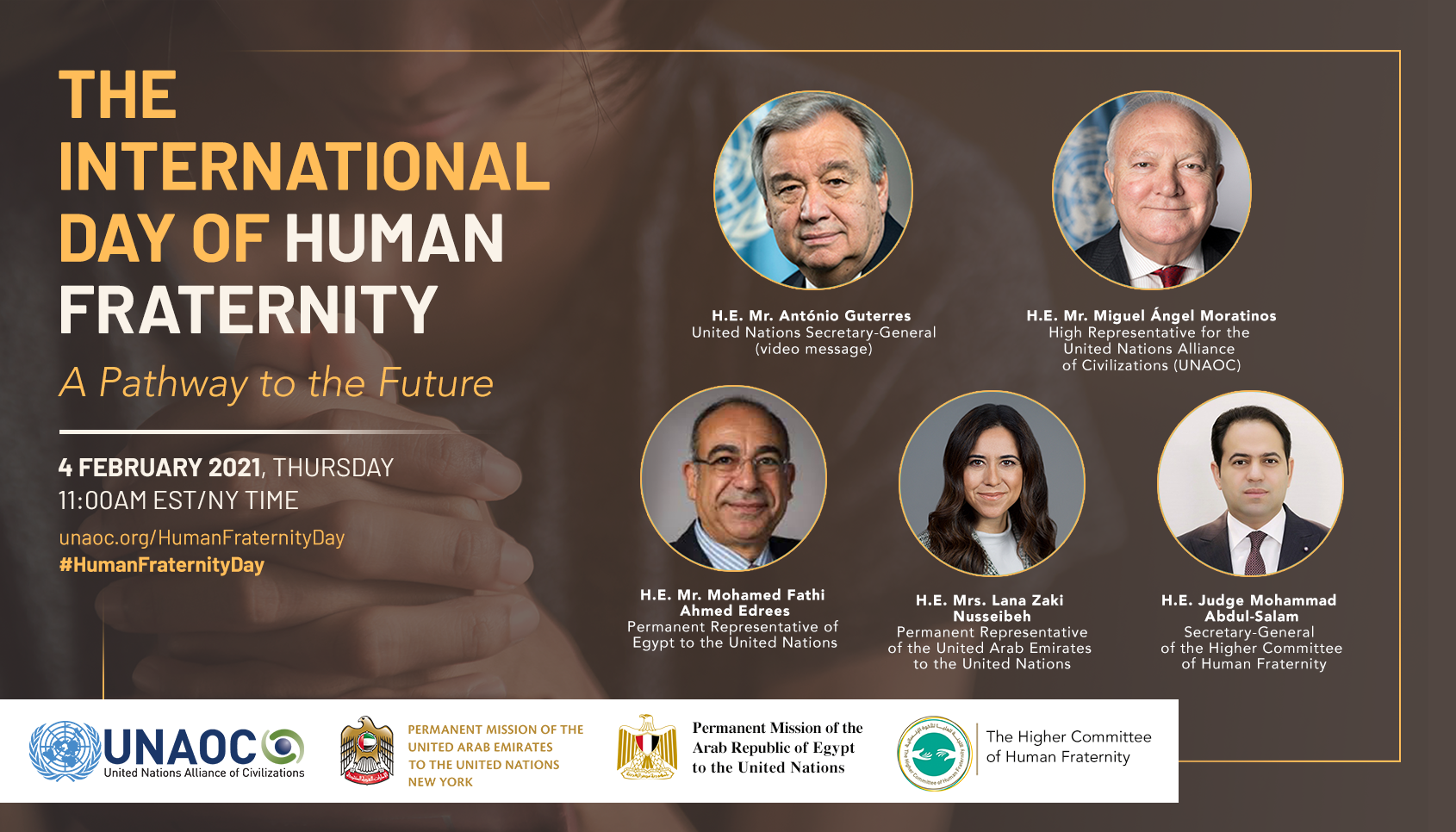 In recognition of the moral imperatives of all religions, convictions and beliefs to call for peace, tolerance and mutual understanding, the United Nations General Assembly proclaimed the first week of February every year the World Interfaith Harmony Week through the unanimous adoption of resolution A/RES/65/5 World Interfaith Harmony Week in 2010. Since the adoption of the resolution, many UN Member States, UN entities, faith actors and relevant entities re-iterate their commitment to spreading the messages of interfaith harmony and goodwill in the world’s churches, mosques, synagogues, temples and other places of worship during that week, based on love of God and love of one’s neighbor or on love of the good and love of one’s neighbor, each according to their own religious traditions or convictions.

The COVID-19 pandemic has put to the test our shared human values. It laid bare deep-rooted inequalities in our societies. Communities were divided across religious, ethnic and cultural lines. Growing religious hatred, stigma and manifestations of various forms of discrimination against vulnerable communities including minorities risk undermining global efforts to recover and rebuild better. This phenomenon is an affront to the values and principles enshrined in the Charter of the United Nations and the Universal Declaration of Human Rights, in particular the right to freedom of thought, conscience and religion as well as the UN General Assembly resolution 36/55 of 25 November 1981 “Declaration on the Elimination of All Forms of Intolerance and of Discrimination Based on Religion or Belief”.

As such, state and relevant non-state actors including, in particular, religious leaders from across the faith spectrum play a vital role in promoting dialogue among all religious groups leading to an improved awareness and understanding of the common values shared by all mankind. Promoting acceptance and respect of religious and cultural diversity through interreligious and intercultural dialogue will create an environment conducive to building peaceful, just and inclusive societies. Member States who have the primary responsibility to counter discrimination and hate speech, and all relevant actors, including political and religious should promote inclusion and unity and to prevent, speak out and take strong action against racism, xenophobia, hate speech, violence, discrimination, including on the basis of age, and stigmatization (UNGA Resolution A/74/L.92 )

In that context, the United Nations General Assembly adopted resolution A/RES/75/200 on 21 December 2020 proclaiming February 4 as the International Day of Human Fraternity to be observed every year as of 2021. The resolution co-sponsored by Egypt and the United Arab Emirates takes note of efforts and initiatives aimed at promoting interreligious and intercultural dialogue including the meeting between His Holiness Pope Francis and His Eminence the Grand Imam of Al-Azhar, Ahmad al-Tayeb on 4 February 2019 in Abu Dhabi that resulted in the signing of the “Document on Human Fraternity for World Peace and living Together”. It also invites all Member States to further promote a culture of peace, tolerance, inclusion, understanding and solidarity.

In that sense, those humanistic principles are aligned with the goals and objectives of the United Nations Alliance of Civilizations (UNAOC) which was created in 2005 to advance intercultural and interreligious dialogue as a viable tool to prevent and defuse identity-based tensions UNAOC works to advance mutual respect for cultures, traditions, and religious beliefs. Over the years, it has provided a global platform for dialogue between faith actors across the faith spectrum emanating from a recognition that genuine dialogue bridges divide and overcomes prejudices, stigmatization, misperceptions, and polarization. Fulfilling a world of “One Humanity, Many Cultures” is the raison d’etre of UNAOC (A/64/14, A/69/312)

The celebration of the first International Day of Human Fraternity within the setting of World Interfaith Harmony Week provides an opportunity to highlight the principles and value included in the Document of Human Fraternity and explore good practices towards its implementation as a pathway to the future as we rebuild a better world.