Over the past year, I have met virtually with almost everyone present here today in the course of the virtual consultations that I conducted with my office on combating antisemitism with relevant stakeholders including some core member states. Today’s meeting will be the first in a series of consultative meetings that I plan to convene in the next few months. These meetings will consider the different facets and contemporary manifestations of antisemitism and explore how we can strengthen our organizational culture to better respond to such scrouge. The ideas and proposals will inform a results-oriented document that can provide guidance towards a coordinated and enhanced response to antisemitism anchored in human rights. 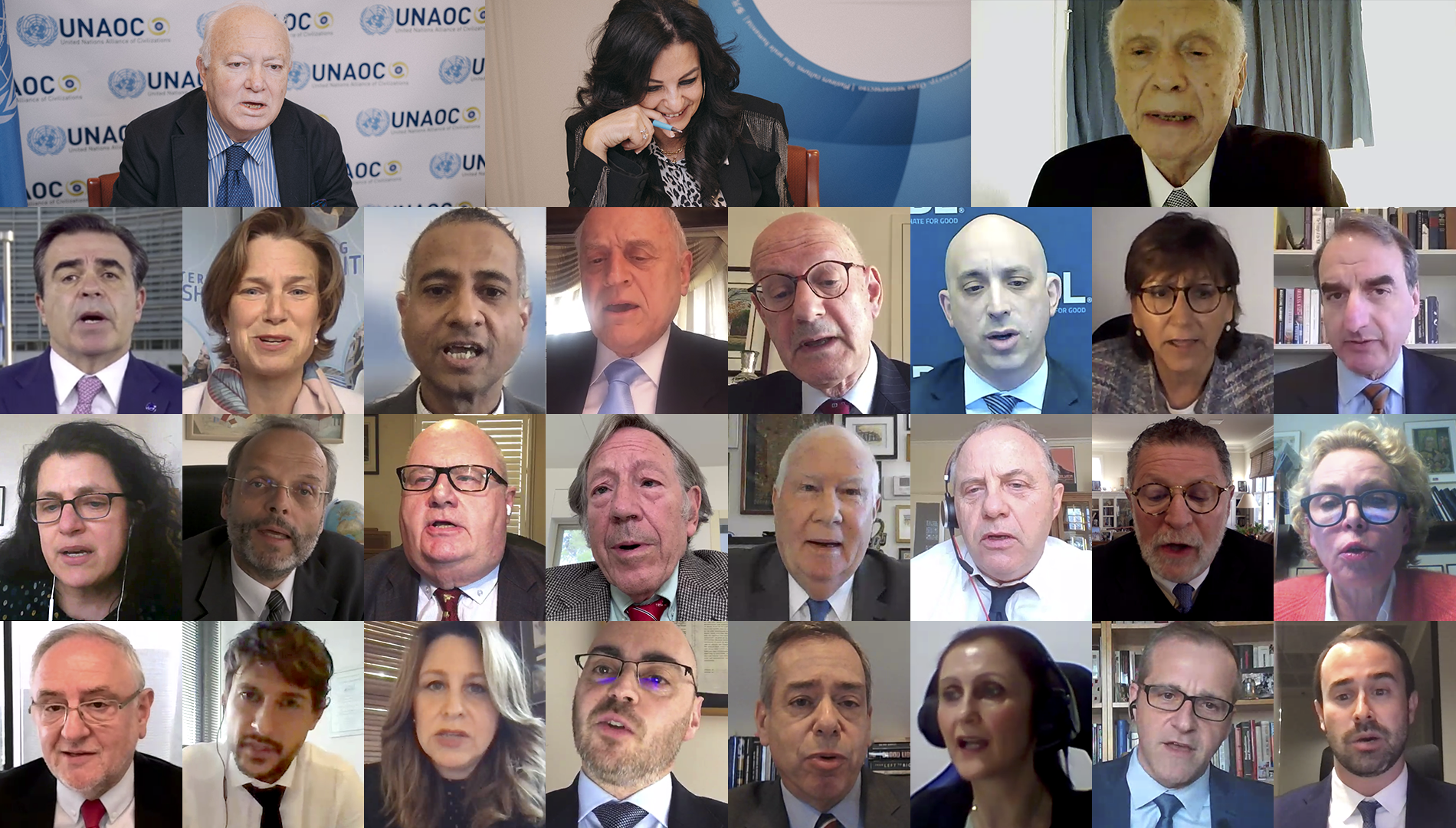 I am very privileged to be convening this meeting that brings us all together for the first time under the umbrella of the United Nations Alliance of Civilizations.

As you are aware, the United Nations Secretary-General designated me in February 2020 as the UN Focal Point to monitor antisemitism and enhance a system-wide response. The designation was in response to the 2019 report, of the Special Rapporteur on Freedom of Religion or Belief, Dr. Ahmed Shaheed Combating Antisemitism to Eliminate Discrimination and Intolerance Based on Religion or Belief.

Over the past year, I have met virtually with almost everyone present here today in the course of the virtual consultations that I conducted with my office on combating antisemitism with relevant stakeholders including some core member states.

Today’s meeting will be the first in a series of consultative meetings that I plan to convene in the next few months.

These meetings will consider the different facets and contemporary manifestations of antisemitism and explore how we can strengthen our organizational culture to better respond to such scrouge.

The ideas and proposals will inform a results-oriented document that can provide guidance towards a coordinated and enhanced response to antisemitism anchored in human rights.

I truly hope that these future meetings will be in person rather than virtual.

It is important to acknowledge what you have already achieved as Jewish organizations, faith actors, envoys, and coordinators on combating antisemitism as well as relevant UN system entities. But as long as this scourge persists, our work is far from being done.

In my endeavor, I will not re-invent the wheel. I will be informed by your expertise and will build on your efforts knowing that there is always room for improvement and innovation. In doing so, I will need your guidance and recommendations.

As you are aware, the United Nations Secretary-General, Mr. Antonio Guterres has given the highest priority to countering hate and all forms of discrimination against Jews and all other communities, religious or otherwise. Mr. Guterres has also been very vocal expressing his deep concern about the disturbing attacks targeting Jews, their sacred sites, institutions, and properties.

The United Nations was founded on the principles of the dignity and worth of all human beings without distinction regardless of the race, color, ethnic or national origin. Being true to our Charter should translate into combating antisemitism and all other forms of discrimination.

Today’s meeting provides an opportunity to share experiences and perspectives.

I wish to share with you my own reflections on the way forward :

1. Let us start first by recognizing antisemitism as a global problem that should be addressed internationally. It is not a Jewish problem or a European/Western problem. It is also a deep-seated threat to democratic values. True, the majority of antisemitic attacks took place in Europe or the US, but our outreach efforts should extend beyond those regions to Africa, Asia and Latin America

2. Monitoring antisemitism: An effective, measured and timely response to antisemitism should be based on accurate and disaggregated data. Accurate data will not be possible without a unified established mechanism on how to report antisemitic incidents. It is, therefore, important to establish such reporting mechanisms to enable a more accurate monitoring and analysis of manifestations of antisemitism.

3. Defining and identifying antisemitism: Relevant to accurate monitoring, in many cases illiteracy about what would be accounted for as antisemitic may prevent reporting.

a) The working definition of antisemitism adopted by the International Holocaust Remembrance Alliance (IHRA) in 2016 says :

“Antisemitism is a certain perception of Jews, which may be expressed as hatred toward Jews. Rhetorical and physical manifestations of antisemitism are directed toward Jewish or non-Jewish individuals and/or their property, toward Jewish community institutions and religious facilities.”

b) The above non-legally binding working definition may serve as guidance for preventive policies including law enforcement and education.

c) It is critical to exercise due diligence to ensure that freedom of expression is protected. At the same time it is equally important that any criticism directed towards the government of Israel is not used as an incitement towards Jews or sacred Jewish sites.

4. The Role of the United Nations: The United Nations strives everywhere to support governments in building inclusive, diverse, cohesive societies anchored in human rights and the rule of law.

a) Learning remains to be key to a better understanding of the Holocaust and Jewish life can contribute to reduce antisemitic stereotypes and prejudices and ensure that it never happens again. However, education about antisemitism should not be limited to the Holocaust and neglecting other contemporary forms of antisemitism. The United Nations Global Communications Department and UNESCO are leading important work providing education guidelines for educators and policy makers. This effort would be further enhanced with the support of member states when school curriculum address antisemitism.

b) Establish mechanism for coordination and engagement with civil society organizations including Jewish organizations which monitor antisemitism so as to ensure a measured and timely response to such incidents at the highest level.

c) Mainstreaming combating antisemitism across UNAOC projects and activities such as the Plural Plus video contest, youth programs and the UN Plan of Action to Safeguard Religious Sites which provides space to work with religious leaders and across the faith spectrum

e) Vocal condemnation of antisemitism based on accurate data. My office has been issuing statements in this regard since my designation

g) Starting a dialogue series on combatting antisemitism within the UN

i) Encourage holding exhibitions, movie screenings and concerts on the holocaust

5. Governments: Member States have the primary responsibility to protect their citizens, their human rights and address the root causes of all forms of intolerance, including antisemitism.

a) The fight against antisemitism should be consolidated within a broader framework that aims at fighting racism, countering extremist ideologies, promoting education on human rights and the values of mutual respect and compassion and the rejection of all forms of discrimination based on religion or belief.

b) Governments should be encouraged to support activities that aim at building interreligious and intercultural dialogue, religious tolerance and mutual respect and dignity for all. As such, they will provide a space for open dialogue, networking and peer-to-peer learning.

c) Illiteracy and ignorance of historical facts creates fertile ground for lies and revisionist history. Therefore, encouraging governments to integrate education and building critical thinking skills around human rights, universal values including freedom of religion and belief is key.
Using global citizenship education as a framework to address antisemitism. Such approach will contribute to protecting societies from mindsets that had produced the Holocaust. The UNESCO, OSCE publication on Addressing Antisemitism Through Education provides useful guidance.

d) Governments are encouraged to consider revisiting the text books in schools that include racist or discriminatory content or terminology including antisemitic references.

f) Enacting legislative frameworks & law enforcement policies prohibiting manifestations of hate speech conducive to incitement to violence on the basis of religion and belief while respecting international laws and human rights laws. In this context, the Rabat Plan of Action is a useful guidance in distinguishing between permissible speech and speech that may amount to incitement to violence. The UN Strategy on Hate Speech is a good tool for understanding and defining hate speech.

h) Prominent political figures are encouraged to speak out against all manifestations of intolerance based on religion or belief or race.

i) Governments are encouraged to share national strategies adopted to safeguard religious sites including raising awareness about the spirituality of places of worship and that attacking religious sites diminishes the whole society not just the affected faith community. The UN Plan of Action to Safeguard Religious Sites provides action points and recommendations to stakeholders

6. Social media companies: The Code of Conduct on Countering Illegal Hate Speech On Line developed by the European Commission provides a good tool.

a) Social media companies are encouraged to invest more resources in improving the existing hate speech notification tools so as to be compatible and up to speed with the fast-growing digital technology. At the same time, more effective and appropriate safeguards should be introduced particularly the human factor in overseeing and verifying illegal content to ensure full respect of fundamental human rights.

b) Introducing innovative tools to combat hate content on the dark web, games and encrypted chatrooms.

e) Enhancing cooperation between the relevant UN entities and social media companies for a better coordinated joint action on hate speech . The Office of the Special Advisor on the Prevention of Genocide is leading UN entities working groups on the implementation to the Strategy on Hate Speech.

8. Explore how to secure funding resources for a global media campaign on combating antisemitism to be led by the United Nations relevant entities under my guidance.

These were my initial reflections on action points that would be further developed.

I look forward to our discussions and to learning more about your comments and recommendations.

Once again, I welcome you all to our first meeting.

I wish to reiterate my personal commitment and the continued commitment of the entire United Nations system to stand firm against antisemitism, bigotry and hatred in all its forms.