At the outset, I would like to thank USG Vladimir Voronkov and his office for the excellent partnership and support throughout 2020. I am pleased to take this opportunity to provide an update on the progress of our activities since we last met in the fall. I look forward to continuing our fruitful partnership with UNOCT and other entities of the UN Counter-Terrorism Global Compact.

UNOCT First 2021 Ambassadorial-level
Quarterly Briefing to Member States
Remarks by the High Representative of the UN Alliance of Civilizations
Delivered on his behalf by Ms. Nihal Saad, Chief of Cabinet
Thursday, 28 January 2021 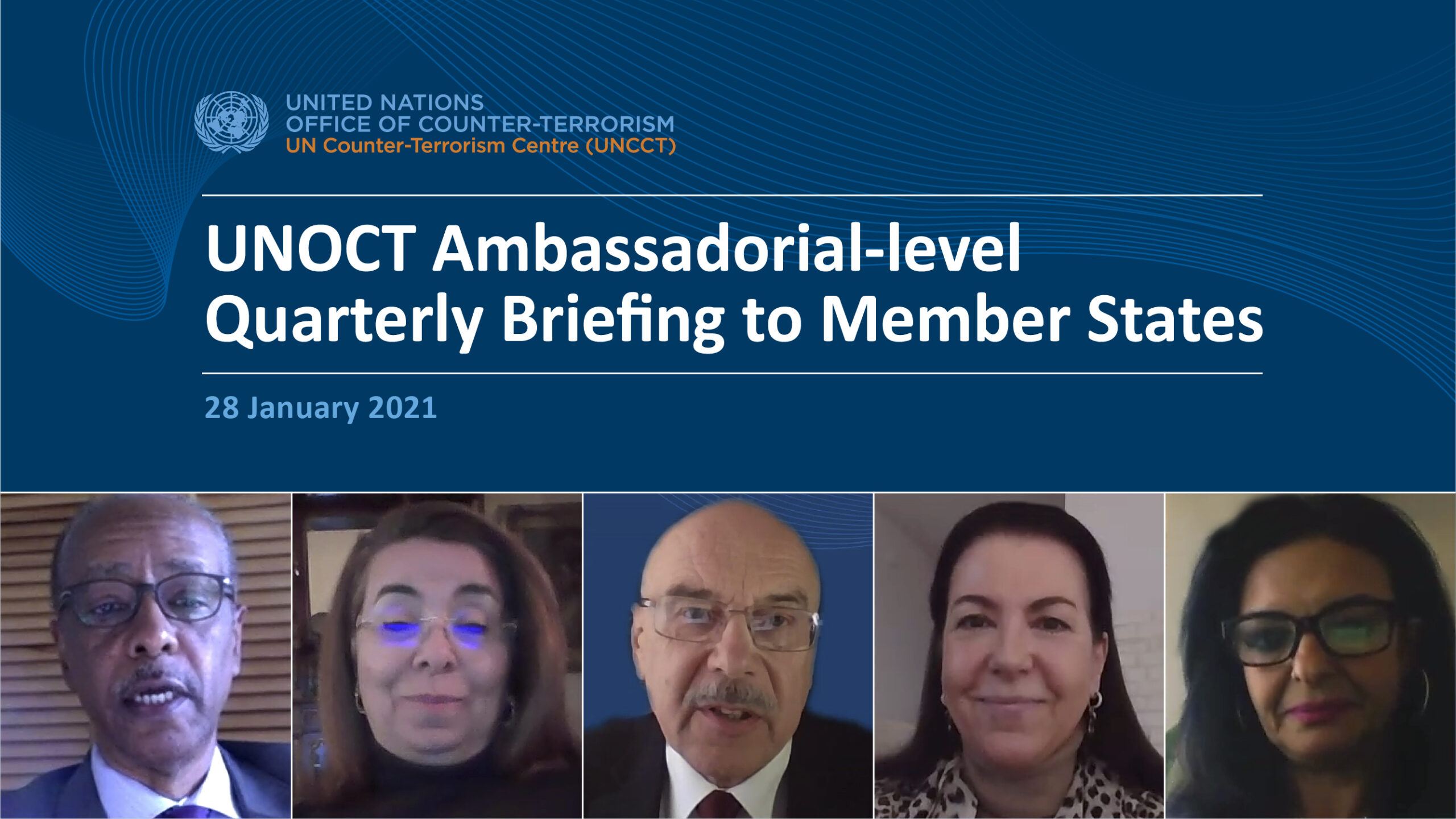 On behalf of the High Representative for UNAOC, Mr. Miguel Moratinos, I would like to apologize for not being able to join this meeting due to technical issues that unfortunately we were not able to resolve . I am pleased to deliver these remarks on his behalf:

At the outset, I would like to thank USG Vladimir Voronkov and his office for the excellent partnership and support throughout 2020. I am pleased to take this opportunity to provide an update on the progress of our activities since we last met in the fall.

1. UNAOC continues to work on the implementation of the UN Plan of Action to Safeguard Religious Sites. In this regard, I would like to thank Member States who co-sponsored last week’s consensual adoption of the General Assembly resolution on “Promoting a culture of peace and tolerance to safeguard religious sites (A/75/L.54)” especially the permanent missions of the Kingdom of Saudi Arabia, Egypt and Morocco for leading the process. The invitation to all Member States and other relevant stakeholders to support, as appropriate, the Plan of Action, as well as the invitation to the UN Secretary-General to convene a global conference as suggested by the Plan of Action, are a testimony of the importance that Member States attach to this crucial issue.

For its part, UNAOC is leading in the two key recommendations addressed to the UN system in the Plan: the development of a global communications campaign and the mapping of religious sites.

We also look forward to working closely with UNOCT, UNCTED, UNICRI and INTERPOL in the implementation of the Global Programme on Countering Terrorist Threats against Vulnerable Targets, which was launched last week, and that will help strengthen Member States’ capacity to develop comprehensive and collaborative strategies in the protection of religious sites.

2. In the spirit of partnership with members of the UN Counter-Terrorism Global Compact, UNAOC led the first Online Youth Consultation on Preventing Violent Extremism through Sport on 20-21 January, within the framework of the UN Global Programme on Security of Major Sporting Events, and Promotion of Sport and its Values as a Tool to Prevent Violent Extremism. The implementation of the Programme is led by UNOCT in partnership with UNICRI, ICSS, UNCTED and ourselves, and with the participation of INTERPOL.

The online consultation, which brought together 50 youth leaders from 38 countries in the five continents, contributed to advance the role of sport and its values for the prevention of violent extremism and advocated for the meaningful and integral engagement of youth in sustainable peace and development.

3. Together with UNOCT and UNCCT, the face-to-face part of the twelve-month joint project entitled “Peer-to-peer capacity-building training Between young religious leaders and young media makers”, was launched 2 weeks ago . Our teams continue to coordinate together as well with the participants from different faiths and their media makers peers.

4. As the United Nations Focal Point to monitor anti-Semitism and enhance a system-wide response, in the course of the past few months I have been conducting informal consultations with Jewish Organizations and UN relevant entities and bodies as well as all envoys and coordinators on combatting antisemitism . I plan to convene a meeting soon with major Jewish Organizations, Envoys and Coordinators on combatting anti-Semitism, UN relevant entities and treaty bodies with the aim of creating synergies between relevant stakeholders and enhancing a system-wide response based on a human rights approach. I would like to note that anti-Semitism which is the oldest form of hate has to been framed within the context of racism, xenophobia and discrimination based on religion or belief, a phenomena that has been in resurgence against the backdrop of the growing far-right extremism and neo-Nazi ideologies in the US, Europe and beyond.

5. Last but not least, under pillar 1 , UNAOC continues its engagement with Youth across our cross-cutting pillars through online workshops aiming at enhancing their peacebuilding skills as a preventive tool.

I look forward to continuing our fruitful partnership with UNOCT and other entities of the UN Counter-Terrorism Global Compact.

Thank you very much.